The ProCreate Project, the Museum of Motherhood and the Mom Egg Review are pleased to announce the 17th edition of this scholarly discourse intersects with the artistic to explore the wonder and the challenges of motherhood. Using words and art to connect new pathways between the academic, the para-academic, the digital, and the real, as well as the every day: wherever you live, work, and play, the Art of Motherhood is made manifest. #JoinMAMA

OUT OF THE FRYING PAN: Beth Grossman -Seven frying pans are hung from men’s belts. Text from The Total Woman, written by Marabel Morgan in 1970 as a response to the feminist movement, is sandblasted into round mirrors stuck in the pan. As viewers read the text, they will see themselves in the mirrors. I ask them to take a look at how much has changed and improved as a result of feminism, and to consider how much remains the same within the male/female relationship. [Link to Procreate Beth Grossman]

ARTIST STATEMENT: In the United States, mothers and children are marginalized, even though we represent a large consumer market. Our leadership work as mothers is undervalued and unpaid. Artists are often are treated similarly. We have held onto our visions as children do, insist on speaking our minds and do the work we love. Our work as artists is often not well compensated in comparison to other commercial markets of similar size and scope.

Female art students are often told in art school “if you want to be considered as a serious artist, don’t have children.” In the traditional model of being an artist, one’s life must be consumed by art making. Raising children is also all-consuming. And yes, it has changed my life as an artist dramatically. I am more focused, organized, energized, inspired and determined to tell my story of being a professional artist and a “good mom.” My son shows me the world anew and I notice my own limited adult views.

My son has now gone off to college and I am entering a next stage of motherhood.  A friend told me that raising my son to be a sensitive, caring, loving young man who wants to contribute and “pay it forward,” was my best creative act. 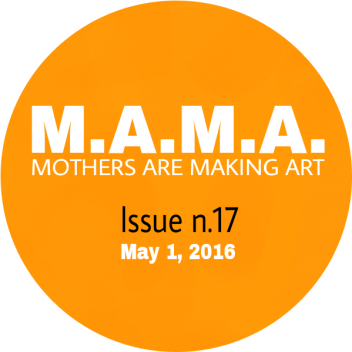 For nine months
I anticipated,

as the other end
of pain,

a revelation:
a world turned

inside out.
Each inch I grew

marked a promise:
my present physical

certainty, my approaching
release. And, indeed,

to the end of ideas:
Beyond pain was born

was revealed
no new knowing but

another body, robust
which no thought

infuriated at air,
and no thought moved closer

to my breast,
and not thought closed

its thinly lidded
round brown eyes,

so soon worn out
by the unfamiliar light.

Nadia Colburn is the proud mother of two,  lives in Cambridge, MA. Her work has been widely published in The New Yorker, American Poetry Review, LARB, Southwest Review, and elsewhere. A founding editor at Anchor Magazine: where spirituality and social justice meet, Nadia teaches online and in person creative writing workshops that bring together the head and the heart. See more at www.nadiacolburn.com