M.A.M.A. Weaving the Past with the Present: Saskia Saunders & Martha Joy Rose

Saunders’ work is strongly linked to a sense of place, the home. Her art is an invitation to experience a calm pause, a moment of contemplation in a world of clutter and noise.

From her travels in Japan, she is inspired by the concepts of negative space (Ma) and embracing imperfections (Wabi-sabi). Creating space in each piece for the mind to focus, notice details and the light between.

Training as a weaver at the University of Brighton has greatly influenced Saunders. The boundaries of art and craft blur as she redefines an ancient craft in contemporary art. 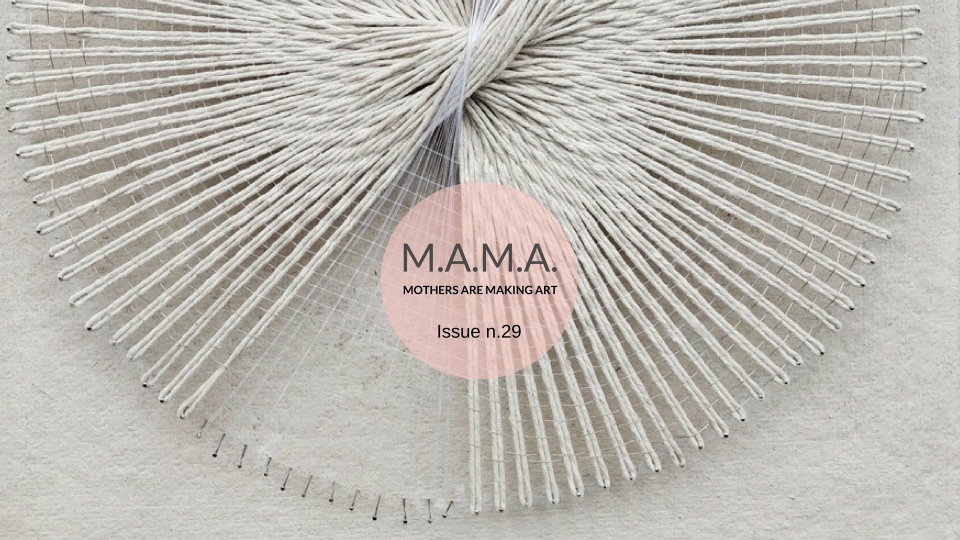 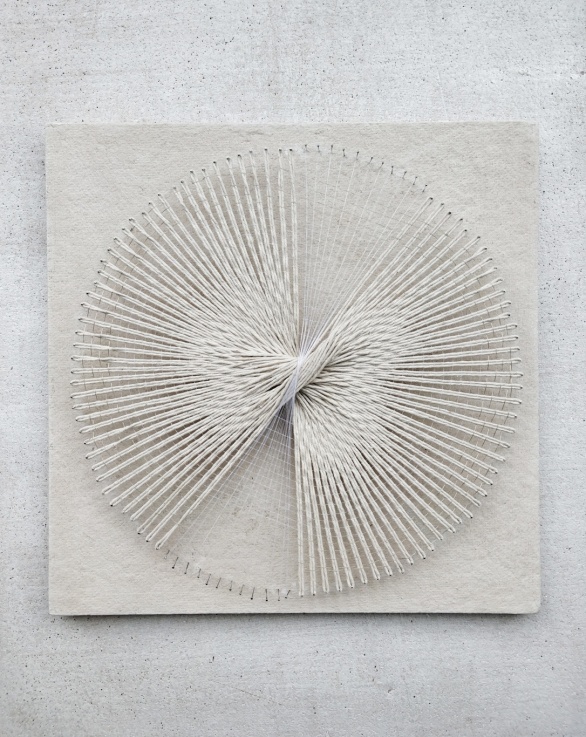 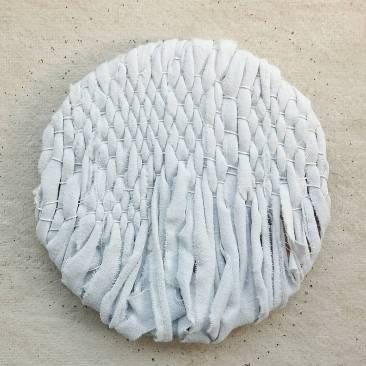 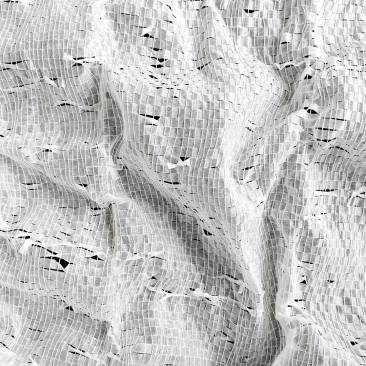 They sat together by the pool under the Tuscan sky. One was a fading beauty, the other in the bloom of youth. All eyes were on the youthful one, chatty and charming, while the older woman suffered unaccountable bouts of sadness accompanied by tears.

“Cluck, cluck” her friends fussed. But, there was nothing to do. It was just time wafting in the wind, turning the pages, spinning the wheel. They made jokes and told stories, but the woman hummed softly to herself testing the Italian language. The strange low, slow sounds were a vocal affirmation, a commitment to presence. A moan.

Her daughter, who was approaching the age of twenty-three, tossed her long hair about and dove into the pool where the stone foundations of the fifteenth century house met with the terraced descent of fresh lavender and ancient rock. She was a sleek mermaid, splaying her arms above her head and frolicking. Everything about her tingled and shivered. She was buoyant and light. She played while her mother professed a headache and climbed the long stairs to her room where she was overtaken by a bout of melancholia.

The trip from America to Italy, which had been years in the making, was twofold. The woman’s daughter had recently graduated college. This was a celebratory adventure. The fact that they were staying with the woman’s friend, who had been her lover forty years before when the two of them were in college, was a footnote. Each had married someone else but kept a commitment to remain friends.

While everyone flirted and chatted in the company of weekend guests she wondered where all the time had gone and how little of it she had left. She reflected on her youth, her passions and then how she had become a mother. She recalled the labor of childhood when each was the center of the other’s world. She thought how all her children were grown now, and stared vacantly into the horizon. These thoughts caused her to languish while everyone else drank Campari, toasting the future. She could not help but compare her age to the younger ones among them. She felt spent and exhausted, like every experience had already happened and there was no reason to bother with anything new. The sun did not agree with her and neither did the food. She was pale and bloated, rubbing her swollen ankles by the side of her bed while the others soaked up the afternoon sun. She could hear them laughing and she was jealous.

Falling into a long sleep, she awoke and observed the fading afternoon light turning shades of pink across the distant mountains. She could hear movement in the rest of the house on the floors below and began to dress for another arduous dinner where she would drink more than her share of prosecco before passing out into another dull sleep.

That night they drove to Cortona. After collecting cashmere and leather, they ordered appertivos and toasted their spoils. This was how their time together unfolded, day after day until a week had passed. Then, on one of their trips, the woman caught sight of a tiny shop on the main square in the hilltop village. The store was etched into a cave and was owned by a man whose father and grandfather, were also jewelers. In the window, a beautiful handmade necklace of heavy silver with a gold coin gleamed against a dark velvet display. While the others in her group argued over the quality of leather in the dark bowels of a biker shop she slipped away to try on the necklace. The kindly clerk fussed over the woman describing the style of craftsmanship, it’s age and the story of the coin of Cortona. This was the way she usually fawned over her daughter and the lavished attention felt good.

She stood looking at herself in the mirror and thanked the girls. Then, she plunked down one hundred and ninety euros for the chain and seventy-seven for the coin. After, the woman stood on the corner holding the coin in her hand. She felt elegant and proud. Her daughter, who was usually loving and attentive was cross on this night and did not approach her as the others waved towards the restaurant where they had planned to meet.

Another dinner of too much wine and heavy meats meant she did not sleep well. This was often the case. She awoke at four A.M. A mixture of emotions lay just below the surface when the time came to say goodbye. They said farewell to her friend’s wife. Goodbye to the large, vertical empty green mountain just beyond the villa’s border. Goodbye to the wild wet fountain, the trees, and the bay leaves. Then, she said goodbye to her friend of forty years, kissing him lightly on the lips. In that moment, they lingered long enough for all the sweetness to come flooding back, transporting her to the place where time stands still– eternally. Taking her daughter’s hand, she bade them hurry so they would not miss their train._

Message from the author: As I share this story with you, the seasons turn from winter, to spring, and soon again to summer. We begin planting now for the productive months to come. This past week, I celebrated my sixty-first birthday. This time has been filled with a sense of vulnerability and awe. It amazes me that I have continued to thrive, even as a LUPUS survivor and renal transplant recipient.  Eighteen years ago, my beautiful girlfriend, Pam Van Hoesen donated her kidney in an act, which literally saved my life. This has allowed me to be here today, writing these words to you. I am blessed with the ability to prioritize time with my family, share love with my friends, as well as to continue the labor of collecting and disseminating knowledge and information about mothers and motherhood at the MOM Art Annex in Florida. I live every day in gratitude, even as a marvel at my body changing through the years. This looks to be an exciting time both personally and professionally. If you are looking for an opportunity for quiet contemplation away from your usual grind and are a scholar, writer, or artist working on material related to women, mothers, or families, please consider applying for a residency opportunity at the Museum of Motherhood in St. Pete. I would love to support your work. [Link]

Bio: Martha Joy Rose is a musician, community organizer, and museum founder. Her work has been published across blogs and academic journals and she has performed with her band Housewives On Prozac on Good Morning America, CNN, and the Oakland Art & Soul Festival to name a few. She is the NOW-NYC recipient of the Susan B. Anthony Award, her Mamapalooza Festival Series has been recognized as “Best in Girl-Power Events” in New York, and her music has appeared on the Billboard Top 100 Dance Charts. She founded the Museum of Motherhood in 2003, created the Motherhood Foundation 501c3 non-profit in 2005, saw it flourish in NYC from 2011-2014, and then pop up at several academic institutions. Her current live/work space in Kenwood St. Petersburg, Florida is devoted to the exploration of mother-labor as performance art. Recent publications include the edited collection, Music of Motherhood with Demeter Press (2018). Exhibitions include the St. Pete Artist Tour (2017, 2018),  M.A.M.A. in collaboration with Procreate Project and The Mom Egg; a monthly digital expression (2016-ongoing), and the “Ima Iyla’a: Art of Motherhood” as part of the 2015 Jerusalem Biennale exhibit.

MOTHERS WORK/MOTHERS PLAY in this issue.

Print – Contributors’ Special Rates     1-4 copies – $12 ea.  5+ copies – $10 ea. (plus shipping). Order online or use the order form attached to order by mail.  Note: Contributors’ Rates are for copies ordered by you, which may be sent to yourself or to others.

Friends and Family –Please feel free to announce your participation in the issue to colleagues, fans, friends and family.  MER Community Rate (friends and family) Print – $15 (reg.  $18)  (plus shipping). Enter code COMMUNITY for a discounted rate.

The Museum of Motherhood, the ProCreate Project, the Mom Egg Review, and the Mother Magazine are pleased to announce the launch of a bi-monthly international exchange of ideas and art. M.A.M.A. will celebrate the notion of being “pregnant with ideas” in new ways. This scholarly discourse intersects with the artistic to explore the wonder and the challenges of motherhood. Using words and art to connect new pathways between the creative, the academic, the para-academic, the digital, and the real, as well as the everyday: wherever you live, work, and play, the Art of Motherhood is made manifest. Download the Press Release here or read about updated initiatives. #JoinMAMA  @ProcreateProj  @MOMmuseum @TheMomEgg